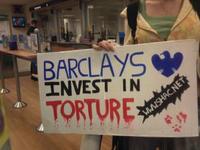 This week it was announced Barclays and four other large investors dropped all shares in Huntingdon Life Sciences (HLS), Europe’s largest and most exposed vivisection laboratory. LSR stock owned by institutional shareholders has now fallen to 12%, placing HLS $4 million below the NYSE minimum listing standard for market value (the only stock exchange listing the company, a major target in the campaign to close HLS).

Following a legal challenge against the CEO’s proposal to purchase all of the outstanding LSR stock, an intense global campaign and recent repression against SHAC in Birmingham, a total of 797,284 shares have now been sold. Barclays Global Investors, Barclays Plc, Hartford Investment Management Company, Rice Hall James and Associates LLC, Bank of New York Mellon and Wells Fargo sold all their shares, of which over 400,000 were held by previously largest shareholder Barclays.

HLS are currently £72 million in debt, with their 1st quarter revenue for 2009 down 24% from 2008, causing managing director Brain Cass this year to admit “…the outlook remains uncertain”. SHAC called for supporters to “…make sure it stays that way and smash HLS for good!”

Huntingdon Life Sciences (HLS) are in the business of poisoning healthy animals to death. They are a contract testing operation that tests products for others. They have three sites two in the UK and one in the US. Five hundred animals are put to death every day by HLS, killing tens of thousands of horses, cats, dogs, primates, rabbits, hamsters, rats, mice and fish amongst others each year.

SHAC was set with the sole aim of closing HLS down. The campaign was set up at the end of 1999 by a group of activists who had successfully closed down Consort kennels and Hillgrove cat farm. Both campaigns ended with the businesses closing down and hundreds of animals being safely rehomed instead of tortured in labs.

HLS’ key weakness is their finances and by throwing the spotlight on those funding their abuse campaigners across the globe have managed to bring HLS to the brink of financial collapse. Throughout the campaign activists have made financial history as one by one major corporations have yielded to protester power and severed their links with the failing company.

Campaigners use evidence obtained in seven undercover investigations at their different laboratories in the UK and USA where HLS workers have been caught on film punching puppies in the face, simulating sex with animals in their care, cutting open primates while they are still alive and falsifying experiments to get products on the market. HLS workers have even been caught drunk at work and dealing drugs at the labs.

Huntingdon Life Sciences have a criminal record from a British court of law for breaking the Companies’ Act. They are the only UK laboratory to ever have their licence revoked by the government.