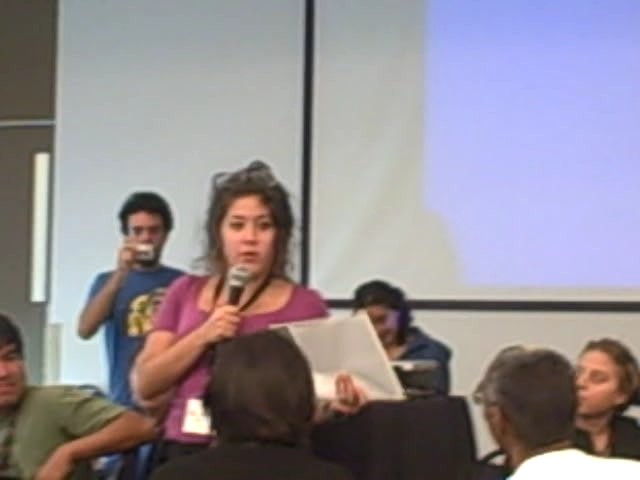 One of the tracks I was excited to see spring forth from the work at last year’s Allied Media Conference was a Spanish language track that centered the work of media makers working in Spanish.

Medios Caminantes roughly translates into walking medias which for me seemed like the perfect metaphor for the on the ground work I heard about and participated in through two workshops.

The first workshop I attended from the Medios Caminantes Track was Repensando La Comunicacíon. 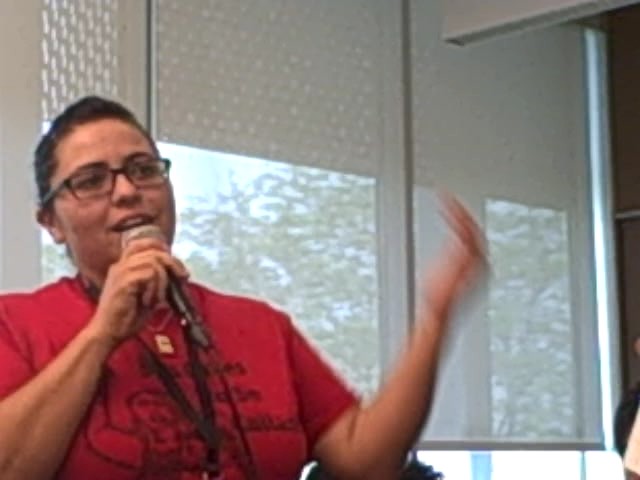 Then a short panel consisting of Spanish language independent media makers presenting their models of organizing. This included independent radio producers in Arizona who started when they saw a need to share truthful information about what was happening in the state regarding the anti-immigration laws and Voces Moviles, who use mobile phone technology to organize and share information.

Then the participants in the workshop were presented with a fictional situation and we broke up into groups to create a representational news account.

While the stats were not surprising, they are always a good reminder as a way to center our work.

The second workshop I went to in the Medios Caminantes track was Open Source Internet Radio with Flujos-Vivos Live CD.

This workshop basicallyused a CD created by the Flujos Vivos Collective based in Mexico. The cd allows you to boot your computer as a Linux machine and includes a variety of open source software to start your own streaming radio station.

I must admit that this workshop felt a little overwhelming pero I found the walkthrough helpful and want to try and use one of my old laptops that has a problem with the OS to start a streaming radio station. Radio VivirLatino anyone? The Flujos Vivos Collective shared the CD free of charge as well as handouts. You can also access a downloadable file to make your own Live CD on their website.

Let’s see how this goes this summer.

The fact that there was a Spanish language track at the AMC brought up many issues for me. I have collaborated with people before who would use the fact that I work primarily in English as a way to delegitimize my identity as Latina. Even though I am fairly fluent, I feel my guard go up because of the ways I have been attacked for using Spanglish. Participating in these two workshops reminded me that Spanish is my language too and how I want to incorporate it in my work here and in other spaces.