"the best desk top in the world" An attempt at a light, logical and modular desktop using mostly existing tools. Currently based on openbox tint2 fittstool

The best desktop in the world tbdtitw

A Challenge: Try This Workflow

Yuri, have you tried this. If you do, let me know how it compares, because am pretty sure tiling windows manager isn’t needed.

note, these keys should be single press key, not a chord.

which key to set really depends on your keyboard. (i’m assuming you are on a full-sized keyboard, not laptop, as you shouldn’t type on laptop keys for long periods.) For a normal PC keyboard, the best keys are likely to be all function keys. but if you use any of the batman keyboards, you have a lot options, such as putting them on thumb keys.

If you do have a keyboard with extra keys, remove ALL keybinding that involves holding a modifier. Remove them ALL. Never press a key combination. 〔➤see Banish Key Chords〕

if you don’t know how to set keys for items i didn’t give explicit instruction, see:

The issue I have with tiling wm’s is they tile. Therefore depriving me of large areas of my screen. That in my opinion is a fail.

The issue I have with stacking wm’s is they tend to expect you to iconify and raise or move and resize them. That in my opinion is a fail.

What I need is maximum window size while still allowing me to SEE what windows are open on which desktops.

I need a way to launch my commonly use applications and tasks and desktop setup automatically (autostart.sh in openbox)

I need a way to launch my commonly use applications and tasks without using a menu and preferably just one click. (fittstool)

I need a way to launch my less commonly use applications and tasks without using a menu. preferably just two clicks (bashrun2 or runner)

I need a way to launch my menus if I want them. I have 3 menus available. All of different types. Directory menus like rox-bookmarks and obbrowser, and openbox menu for utilitys. I have fbpanel menu for launchers should I need it but it’s rarely even started.

I run 95%> of my windows maximized. Not full screen, maximized. I cycle between them via scroll wheel over tint2 or Alt-Tab.

I raise or lower windows in the stack as needed by selecting the application icon in tint2 or Ctl-F8. I have no need to iconify them.

I can should I need to display two windows on the same desktop/work-space by splitting the screen with windows either vertically or horizontally on the odd occasions it’s beneficial with Ctl-F10 and Ctl-F9.

I base my desktop around tint2 and fittstool and require the wm to do very little.

What a window manager should do and why.
In reality I’m describing most of what I do with openbox and tint2 and fittstool already :-)
It’s just that they can do loads of the things that make no sense to me as well

Resizing windows is rarely needed if you run maximized. I general if your resizing windows your desktop setup is failing. You should never need to resize a window unless it’s a split window and that should resize the other split window.

Alt-Tab aware across all desktops so it shows all running applications You don’t need desktop icons (if your active windows are maximized you can’t see them. Desktop icons are used to launch applications but it’s not a window managers job it’s a run dialogs, menus or launchers job. Closing or moving or resizing a window to launch an application is crazy.

I currently Drag n drop between windows via tint2. So if you have several windows open you can select something be it a file or text and drag it to another window via the tint2 across all desktops.

Be able to set a few pixel border for things like fittstool and desktop scrolling via the mouse. Dual monitor support Be copyleft GPL3/AGPL3 or later

Note this project is a moving target, it gets tweaked almost every day and I update this post monthly at best.

I’ll try and list all my packages so most of it works as per the videos!

video of it in action: https://goblinrefuge.com/mediagoblin/u/kelsoo/m/tbdtitw/

I only have 32bit packages so if your on 64bit you may need to build them!

to change window manager before loging in run “wmconfig”

fbpanel
I like to have fbpanel in my openbox menu incase I want to start a dynamic menu. It hidden 15 pixels in from the top left so as to not interfere with fittstool
gungre.ch/dragora/repo/kelsoo/fbpanel/f... #32bit

skippy-xd
I have skippy-xd in fittstool (top-left scroll-wheel). Useful if you have many applications open on one desktop. It runs via a script to ensure only one instance as the daemon is said to be a bit buggy.

One click or drag:
calendar
moving windows to other desktops
add and remove desktops via lmb on desktop number

openbox
a kelsoo remix called
Onyx-lessr-red
I have included a version in the openbox directory
put it in ~/.themes

This will overwrite the menu.xml so back yours up first! See. my custom settings link to be provided!

For the rox bookmarks be in the openbox menu you need to enable
bookmarks.py

the included directorys (openbox, fittstool, tint2, and fbpanel) need to be placed in the hidden ~/.config directory ctl+h in your home directory to see it 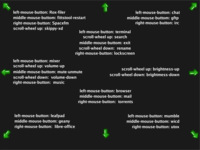 For the short cut lovers tbdtitw work fine as well